Social Media has taken the world by storm, with around 2.3 billion active users. Facebook, the social media giant, alone witnesses a steady traffic of 1.09 billion users every single day! But did you know that out of these, a whopping 83 million are fake profiles?

While some of these fake accounts are used by crafty businesses for their marketing gimmicks, others use them for ‘special’ purposes. Many of us have been contacted through ‘Chats’ and ‘Pokes’ by at least one of these fake strangers. And sometimes these interactions morph into something serious. We are not talking about the social media love affairs that are glamourized by Bollywood. It is time to have a look at the darker side.

The Darker Side of Social Media
In this video, Coby Persin conducts social experiments using fake Facebook accounts on tweens and teenagers. Watch the victims throw caution to the winds, and meet strangers in unsupervised conditions! An instance closer home. A few months ago, Kusum Singal, 30, was found murdered at her flat in Bangalore. The culprit was her social media ‘buddy’, a man she befriended online and invited home. The man visited her, demanded money and when couldn’t have it, killed Kusum and robbed her house.

What is it that makes us believe in total strangers? What makes us invite such dangers into the sanctuary that is our home? A spirit of spontaneity and adventure maybe, which boomerangs on the unsuspecting. Can we do something to filter out this menace that lurks in our social accounts?

The answer is yes.

Predicting Social Personalities
We at AgilizTech proposed a way to sift out the fakes from the genuine. At Neo4j GraphGist’s Winter Challenge, our team (consisting of Shyamraj Sampath and Prabhu Raam) presented a unique resolution, using the Neo4j technology. A solution that allows behavioral pattern analysis of social media accounts. If an account displays suspicious characteristics (as depicted in the picture), it is brought under the scanner. 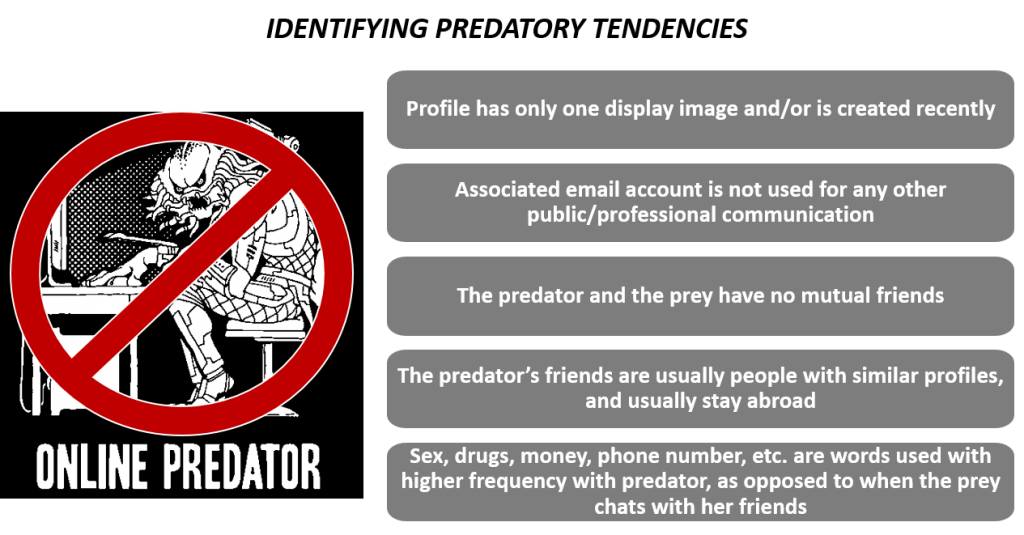 Once the analysis is complete, a score is awarded to the profile, thus divulging the ‘friend’s’ real intentions. If the score is high, this fake profile is flagged and the concerned authorities are notified with a request to monitor and take suitable action. The idea received accolades from the panel of judges and was touted as a creative response.
You can learn more about this solution at the GraphGist site. The predatory tendency identification model is an evolving one, and there is definite scope for improvement. As new characteristics are uncovered every day, the model gets strengthened, thus tightening the hold over online predators. We are open to suggestions from the good Samaritans online and value contributions to make social media safer.

While social media gives us some great moments, it is vital to tread with caution. After all, ‘All that glitters is not gold’.

What do you think are some measures that can prevent such social media frauds?  We would like to hear from you in the Comments section.